If you work from more than one computer, it can be frustrating keeping on top of what documents are on which machine, and if the same document is on both machines – which is the most up-to-date version?

Dropbox is great for dealing with this situation. And provided you don’t use more than 2gb storage space, Dropbox is FREE!

Dropbox is a folder on your computer where you put the documents you are working on – it can contain as many sub-folders as you like. 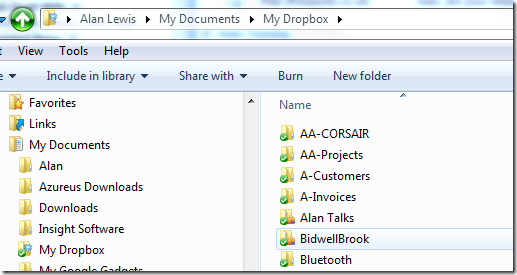 The neat thing about it is that Dropbox uploads its contents to my Dropbox account on the web. Any document I add to any of the folders in Dropbox, or anything I change or delete, automatically gets added, changed or deleted in Dropbox on the web.

But if I have a laptop at home and a PC at work, I can install Dropbox on my other computer, and it will synchronize the Dropboxes on both computers. I’ll have one set of files, which always contains the latest version of whatever I am working on.

No more emailing stuff from work to home, or carting stuff about on a USB memory key and getting confused as to which is the most up to date version of a document I am working on.

Notice the green ticks against the folders. When new files are added or changed, this tick changes to a blue recycle icon, which shows that folder is being synchronized. When synchronization is complete it changes to green again 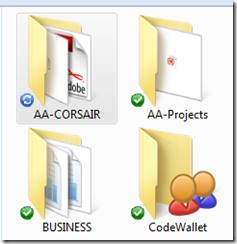 This means that I’ll have a copy of my files on my home laptop, an identical copy backed up on the web, and another identical copy on my work PC – all kept in sync.

If you keep your favorites and bookmarks in sync using Xmarks, you’ll have pretty much everything you need to work on any machine. And if you’re using someone else’s computer, you can just go to your Dropbox on the web, log into your account and download any files you choose, or upload anything you want to add. When you log into your PC next time, Dropbox will take a short while to sync again and then you’ll be up-to-date again

Dropbox as an Online Backup Tool

Dropbox is not the most versatile of online backup tools. You can’t schedule backups, the app runs all the time and takes quite a bit of RAM to run. I get around this by not running dropbox automatically – I manually start it when I choose, so that it is not running in the background all the time, and doesn’t slow any other programs down.

Dropbox is also not suitable for backing up your whole computer – programs and everything. It’ll only back up what is within Dropbox. But it is so simple and easy to use. There are other alternatives, however…

If you do want to sync a folder outside of Dropbox you need to use a third party tool like Junction Link Magic. I use this to include my Desktop files and folders in what gets backed up, so anything I dump on the desktop  will be included in Dropbox

One brilliant feature of Dropbox, is that it keeps previous versions of files for up to 30 days. So if you have accidentally over-written a previous version, you can go to your Dropbox account on the web and restore the earlier version.

The simplest way of backing up Outlook into Dropbox (so your emails, calendar and contacts are backed up online) is by using the Outlook Personal Folders Backup add-in from Microsoft. (There is no equivalent version for Outlook Express but Outlook Express Backup is a free program which does something similar).

This neat add-in is easy to configure, and will automatically back up your Outlook data file to a folder of your choice. I have an Outlook Backup folder in Dropbox, and I’ve set the Personal Folders Backup to happen every day, so whenever I close Outlook it will prompt me to save a backup if it hasn’t done one that day. It’s very neat.

Dropbox as a Collaboration Tool

It is possible to Share folders with another Dropbox user. My partner Vanessa and I collaborate on our website Zen Moments, and so we have a shared Zen Moments folder in our Dropboxes. Whatever either of us adds, changes or deletes in this folder will be updated in the other person’s shared folder in their Dropbox. This is great as a collaboration tool.

This is a folder where I can put files which I can share with others. It is not fully a Public folder – if you try to open the folder itself http://dl.dropbox.com/u/677812/ you will get a 404 not found message

For example, I created a Windows 7 Barn Owl Feathers Theme and I want to make that available for download. I simply copy the file into Dropbox’s Public Folder, and create a download link that looks like this: http://dl.dropbox.com/u/677812/BarnOwlFeathers.themepack