You may get a call from “Microsoft” or “Microsoft Tech Support” – claiming that they have detected serious problems with your computer. They may even call you by name. They say they can take control of your computer and fix it for you. 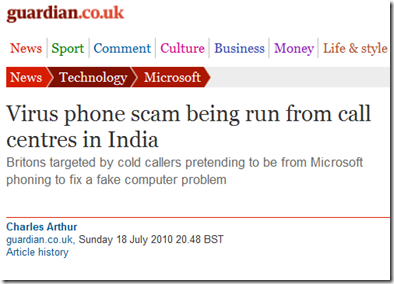 From a Recent Guardian Article:

The scam always starts the same way: the phone rings at someone’s home, and the caller – usually with an Indian accent – asks for the householder, quoting their name and address before saying “I’m calling for Microsoft. We’ve had a report from your internet service provider of serious virus problems from your computer.”

Dire forecasts are made that if the problem is not solved, the computer will become unusable.

The puzzled owner is then directed to their computer, and asked to open a program called “Windows Event Viewer”. Its contents are, to the average user, worrying: they look like a long list of errors, some labelled “critical”. “Yes, that’s it,” says the caller. “Now let me guide you through the steps to fixing it.”

The computer owner is directed to a website and told to download a program that hands over remote control of the computer, and the caller “installs” various “fixes” for the problem. And then it’s time to pay a fee: £185 for a “subscription” to the “preventative service”.

The only catch: there was never anything wrong with the computer, the caller is not working for Microsoft or the internet service provider, and the owner has given a complete stranger access to every piece of data on their machine

Avoid scams that use the Microsoft name fraudulently

Cybercriminals often use the names of well-known companies, like ours, in their scams. They think it will convince you to give them money or your personal information. While they usually use email to trick you, they sometimes use the telephone, instead.

Common Phone scams that use the Microsoft name

We do not send unsolicited email messages or make unsolicited phone calls to request personal or financial information or fix your computer.

If you receive an unsolicited email message or phone call that purports to be from Microsoft and requests that you send personal information or click links, delete the message or hang up the phone.

In this scam cybercriminals call you and claim to be from Microsoft Tech Support. They offer to help solve your computer problems. Once the crooks have gained your trust, they attempt to steal from you and damage your computer with malicious software including viruses and spyware.

Treat all unsolicited phone calls with skepticism. Do not provide any personal information.

If you receive an unsolicited call from someone claiming to be from Microsoft Tech Support, hang up. We do not make these kinds of calls.

A survey from Microsoft reveals just how widespread the fake tech support call scam is becoming.

The crooks cold-call people at home and claim to be calling from Microsoft or a well-known security firm and offering “free security checks”.

The software giant surveyed 7,000 computer users in the UK, Ireland, US and Canada and found an average of 16 per cent of people had received such calls. In Ireland this rose to a staggering 26 per cent.

More than a fifth of those who received such a call, or 3 per cent of the total surveyed, were tricked into following the crooks instructions which ranged from allowing remote access of their machines, downloading dodgy code or in some cases giving credit card information in order to make purchases.

Microsoft said if someone claiming to be from Windows or Microsoft Tech Support calls you: “Do not purchase any software or services. Ask if there is a fee or subscription associated with the ‘service’. If there is, hang up.”

Microsoft warned that while the gangs were currently targeting English-speaking countries it was just a matter of time before they go after other countries.

The company advised anyone who had already fallen for such a scam to change their passwords, scan their machines for malware and contact their bank and credit card providers.

There is more discussion of the issue here